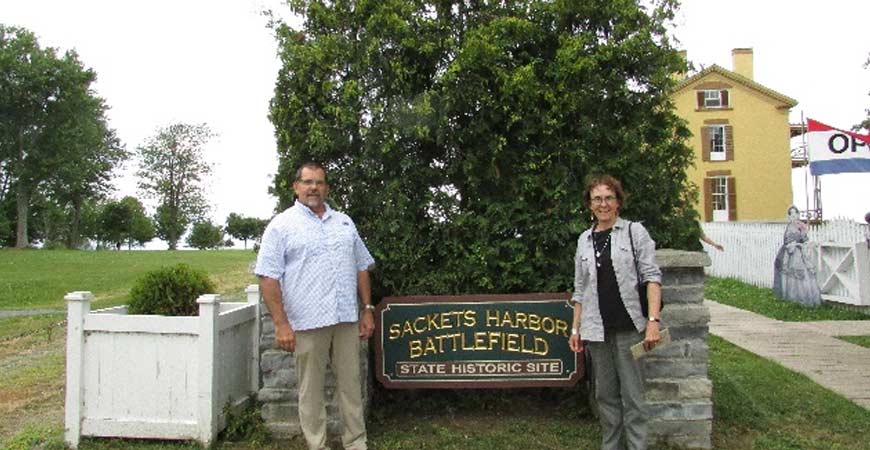 I just returned from a trip to visit the historic location of General Pike’s successful attack of Fort York in Toronto and his final resting place in Sackets Harbor, NY.

I must say, of all the historic sites I have had the pleasure to visit, Fort York is one of the finest. The restored fort, surrounded by downtown Toronto, has been masterfully preserved and restored. It is a registered archaeological site, and home to Canada’s largest collection of original War of 1812 buildings with a fantastic collection of artifacts from the Fort’s history.

There are several items relating to Pike, and I learned that, just prior to being killed, the General had just aided a wounded man and sat down on s stump to examine a captured British sergeant. The retreating British blew up their powder magazine sending shrapnel and debris that killed many American soldiers including Pike, according to Lieutenant Donald Frasier, 15th Infantry Regiment, U.S. Army. The explosion was so large it was seen and felt in Niagara Falls.

Fort York’s collection of artifacts and memorabilia is astounding. There are a number of items relating to General Pike, all of which are presented in respectful manner. A visit to this site is an educational and humbling experience.

Sackets Harbor is also a wonderful historical site and village. By 1813, the village became the US Naval Headquarters building eleven warships to establish control over the Great Lakes at the Navy Point shipyard. The village was the site of two battles during the War of 1812. In the first battle in 1812, the brig USS Oneida and shore batteries repulsed an attacking force of five British ships. In the Second Battle of Sackets harbor in May 1813, British forces landed and attacked the village, but they were again driven off.

After the war his remains were interred to the newly constructed Madison Barracks across the harbor, and in 1909 once again moved as the Army relocated the Sackets Harbor Military Cemetery to its present location. A mortar anchored to a stone block memorial sits on General Pike’s final resting spot.

Originally Fort Volunteer, renamed Fort Pike after the Fort was strengthened to defend the Harbor.

The ‘End of the Trail’ for General Zebulon Montgomery Pike. Memorial Stone with Mortar marks the General’s final resting place.

“If success attends my steps, honor and glory await my name-if defeat, still shall it be said we died like brave men, and conferred honor, even in death, on the American Name.”   Zebulon Pike

“Our debt to the heroic men and valiant women in the service of our country can never be repaid. They have earned our undying gratitude. America will never forget their sacrifices.” – President Harry S. Truman

For nearly two centuries Madison Barracks helped to protect and preserve America. Founded in an important strategic location during the War of 1812, the Barracks have aided our country in every war, from the War of 1812 to World War II. I housed many significant military figures over the years including President Ulysses Grant.