Zebulon Montgomery Pike was born during the Revolutionary War, on January 5, 1779, near Lamberton, (Lamington), NJ. He married Clarissa Harlow Brown in 1801.

Pike was an avid self-learner. He chose a military career as did his father, Zebulon Pike.

He joined his father’s Army unit in early 1799 at Fort Massac, Territory Northwest of the River Ohio (now Illinois). He was appointed 2nd and 1st Lieutenant in 1799. He piloted several cargo vessels to the frontier from Pittsburg and Cincinnati.

He was assigned to several forts on the Ohio River leading to his payroll assignment at Fort Kaskaskia on the Mississippi River in 1805. Pike in New York and Canada

He was noticed by General James Wilkinson, the first Governor of the Louisiana Territory, who assigned him to command the first exploration of the headwaters of the upper Mississippi River – 1805-1806.

Upon return Wilkinson assigned Pike to be the first American to explore the American Southwest.

Pike’s Quick Rise in the Military

During the Southwest Expedition Pike was promoted to Captain when he was west of Warsaw (Ozarks) – Benton County, MO. After the 2nd Expedition, he became Major Pike in May 1808, assigned to the 6th Infantry.

After his promotion to Lieutenant Colonel on 31 December 1809, he became Military Agent in New Orleans in 1809 and 1810. On November 7, 1811, he participated in the Battle of Tippecanoe near Lafayette, IN led by Governor William Henry Harrison.

Pike was the Army’s Deputy Quartermaster General from 3 April to 3 July 1812. 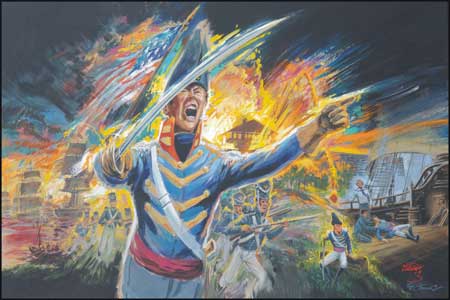 On 12 March 1813, he was again promoted to Brigadier General and the Army’s Adjutant General & Inspector General. Pike was stationed at the newly fortified rural military outpost of Sackets Harbor, on New York’s eastern shore of Lake Ontario.

After the capture of Fort York he was killed by flying rocks and debris when the withdrawing British garrison blew up its ammunition magazine as Pike’s troops approached Fort York. His body was brought back by ship to Sackets Harbor, where he is buried at the military cemetery.

In 1810, Pike published the Journals of his 2 expeditions. He wrote from memory the first portion of his 2nd (Southwest) expedition because the Spanish confiscated his papers in Chihuahua, MEX. The book was so popular that it was translated into Dutch, French, and German. An original English copy of this book can be found in the San Luis Museum in Alamosa, CO.

General Pike’s orders before the invasion of York “When the debarkation shall take place on the enemy’s shore Major Forsyth’s light troops, formed in four platoons, shall be first landed. They will advance a small distance from the shore and form the chain to cover the landing of the troops. They will not fire unless they discover the approach of a body of the enemy, but will make prisoners of every person who may be passing and send them to the General. They will be followed by the regimental platoons of the first brigade, with two pieces of Brooks’s artillery, one on the right and one on the left flank, covered by their musketry and the small detachment of riflemen of the 15th and 16th Infantry. There will be landed the three platoons of the reserve of the first brigade under Major Swan. Then Major Eustis with his train of artillery, covered by his own musketry. Then Colonel McClure’s volunteers in four platoons, followed by the 21st Regiment in six platoons. When the troops shall move in column, either to meet the enemy or take a position, it will be in the follow ing order, viz.: 1st — Forsyth’s riflemen with proper front and flank guards, the regiments of the first brigade with their pieces, then three platoons of reserve, Major Eustis’s train of artillery, Volunteer Corps, Twenty-first Regiment, each corps sending out proper flank guards. When the enemy shall be discovered in force, the riflemen will form the chain and maintain their guard until they have the signal, (the preparative,) or receive orders to retire, at which they will retreat with the greatest velocity and form equally on the two flanks of the regiments of the first brigade and then renew their fire. The three reserve platoons of this line will form under the orders of Major Swan, one hundred yards in rear of the colors, ready to support any part which may show an unsteady countenance. Major Eustis and his train will form in the rear of this reserve, ready to act when circumstances may dictate. The second line will be composed of the 21st Infantry in six platoons, flanked by Colonel McClure’s Volunteers, equally divided as light troops. The whole under the orders of Colonel Ripley. It is expected that every corps will be mindful of the honor of the American army and the disgraces which have recently tarnished our arms, and endeavor by a cool and determined discharge of their duty to support the one and wipe off the other. The riflemen in front will maintain their ground at all hazards until ordered to retire, as will every corps of the army, with an assurance of being duly supported. Should the Commanding General find it prudent to withdraw the front line he will give orders to retire by heads of platoons covered by the riflemen, and the second line will advance by the heads of the platoons, pass the intervals and form the line, call in light troops and renew the action. But the General may find it proper to bring up the second line on one or both flanks, to charge in column and perform a variety of manoeuvres which it would be impossible to foresee. But as a general rule, whatever may be the direction of line at the beginning of the action, the corps will form as before directed. If they then advance in line it may be in parallel echelons of platoons, or otherwise as the ground or circumstances may dictate. No man will load until ordered, except the light troops in front, until within a short distance of the enemy, and then charge bayonets, thus letting the enemy see we can meet them with their own weapons. Any man firing or quitting his post without orders must be put to instant death, as an example may be necessary. Platoon officers will pay the greatest attention to the coolness and aim of their men in the fire, their regularity and dressing in the charge. The field officers will watch over the conduct of the whole. Courage and bravery in the field do not more distinguish the soldier than humanity after victory, and, whatever examples the savage allies of our enemy may have given us, the General confidently hopes that the blood of an unresisting enemy will never stain the weapons of the .soldiers of his column. The unoffending citizens of Canada are many of them our own I countrymen, and the Provinces have been forced into the war. Their property therefore must be held sacred, and any soldier who shall so far neglect the honor of his profession as to be guilty of plundering the inhabitants, shall, if convicted, be punished with death. But the Commanding General assures the troops that should they capture a large quantity of public stores he will use his best endeavors to procure them a reward from his government. This order shall be read at the head of each corps, and every field officer shall carry a copy in order that he may at any moment refer to it and give explanations to his subordinates. All those found in arms in the enemy’s country shall be treated as enemies, but those who are peaceably following the pursuits of their various vocations as friends and their property respected.”

By order of the Brigadier-General,
Charles G. Jones, Aid-de-Camp