The initial roots of our Association stem from an observance of the Pike Bicentennial, an impressive commemoration of Zebulon Montgomery Pike’s 2nd Expedition celebrated by the Santa Fe Trail Association. Pike’s Southwest Expedition lasted 351 days from July 15, 1805 to July 1, 1806. Arrangements to hold festivities celebrating the different aspects of Pike’s SW journey were made in the towns along the Pike route in Kansas and Colorado.

The Pike “Siting of the Small Blue Cloud Memorial” dedication in Las Animas, CO was particularly impressive. This was a Santa Fe Trail Association Pike Bicentennial event supported by its Bent chapter and the town.

The dedication occurred at 2 pm on November 15, 2006, on the same spot Pike and his men stood 200 years to the minute prior when Pike sited Pikes Peak, or as he called it the Grand Mountain.

From 171 miles distance (to Pikes Peak)- “At 2 o’clock in the afternoon I thought I could distinguish a mountain to our right, which appeared like a small blue cloud; viewed it with the  spyglass, …” -Pike Journal 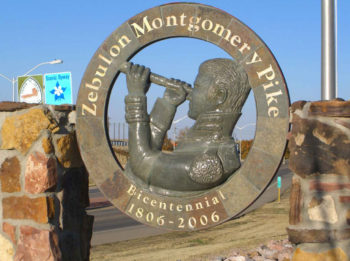 Pike remembrance on US 50 in La Junta

The informal organization of the Pike National Historic Trail Association took place in Trinidad in September of 2007 fittingly near the Equestrian statue of Kit Carson. The Founding Board was staffed by Dr. Clive Siegel from Texas; Dr. Leo Oliva from Kansas; John Patrick Michael Murphy from Colorado Springs and Harv Hisgen from Conifer, CO.

We quickly went to work-

In October we set out to write the Articles of Association and Bylaws, apply for Non-profit status with the IRS, obtain a Federal EIN number, gain new Officers and members on our Board, gain the support of the Pike Family Association and three National Historic Trail Associations including the Santa Fe Trail Association, Lewis and Clark Foundation, and the El Camino Real (Texas).

By November 2007 we gained 2 Life members and 2 Corporate sponsors while John provided legal assistance and the federal filing fees. We appreciate the interest and involvement of the Pike Family, the many involved in bringing the Pike Bicentennial to the nation’s attention, and the support and partnerships with other long distance trail organizations.

In 2008 we established Senate sponsorship for legislation (by Senator Michael Bennet) to begin a feasibility study by the Park Service, the first step in national nomination for dedication of the Pike footprint as a National Historic Trail. The legislation continued to be introduced every two years by Senator Bennett with Senators Udall and Gardner Co-sponsorship, to no avail as of 2018.

We began the effort to collect lists of Pike sites for interpretation and possible nomination as National Historic sites. We currently have 110 monuments cataloged across the US with 3 notably in Toronto, Canada. 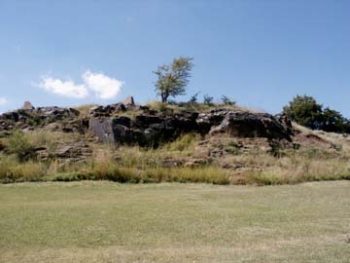 In September 2008, we field surveyed Pike’s route from Missouri to Colorado for Auto-Tour and Hike/Bike routes. We gained the support of many along the route. Notable memories include fully investigating Fort BelleFontaine; the mouth of the Osage River; the Ozarks; the Osage homeland in SW Missouri; the Pawnee homeland on the Republican River in Guide Rock NE; the Cheyenne Bottoms Refuge near Great Bend, KS; Pawnee Rock and Fort Larned NHS near the Santa Fe Trail building in Larned, KS; and encountering too many roads with destroyed bridges.

The website, in renewed form, was launched December 5, 2008. Currently it is available with an abundance of educational materials and updated features. The website is referenced by school children, government officials and scholars alike, all of whom contact us desiring even more information and access to our resource files. 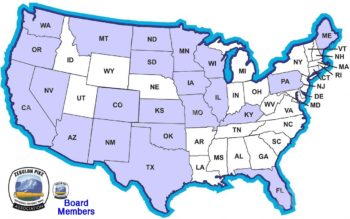 At our annual Board and Membership meeting in Cañon City, CO on May 30, 2009, we elected the original fully staffed Board.

The generosity of the Royal Gorge Bridge and Park organization is greatly appreciated, hosting our annual meeting at their Bighorn Lodge for the past 10 years since 2008. 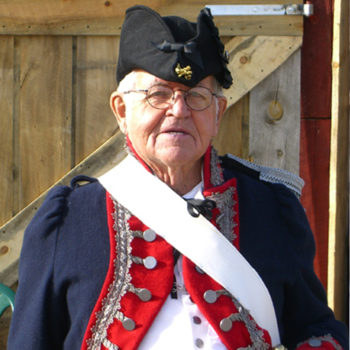 Interpretive efforts about Pike and his life/legacy began during the Bicentennial and continue. They include in-person presentations; area specific brochures; newsletter articles; museum and school presentations; roadside panels and a smartphone app.

In 2009 we published the Pike Fact Sheet for the SW Expedition containing Maps, text about the Expedi-tion, specific route, dates and mileage as well as the Association’s accomplishments.

In 2010, 16 Pike roadside panels were installed in the Upper Arkansas, Wet Mountain Valley and San Luis Valley through the labors of Board members Kit Shy, Dorothy Urban and others. 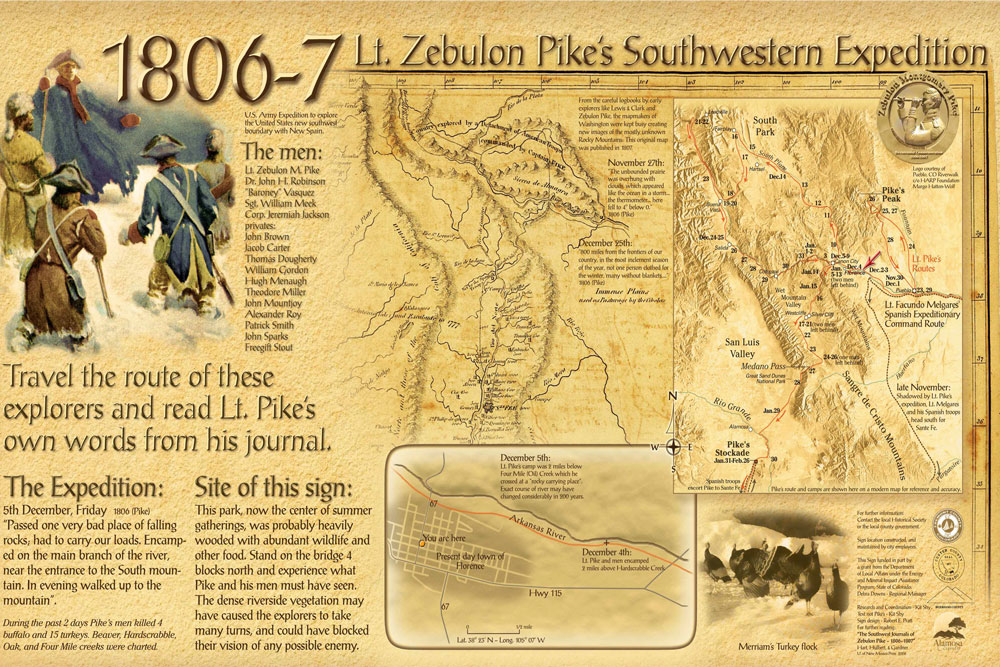 In March 2011 the Colorado State Legislature unanimously passed a joint resolution supporting the Pike federal feasibility study legislation. To promote the federal legislation we additionally had the support of County Commissioner, town mayors and administrators, historical and preservation societies, and 300 private citizens. Senator Kevin Grantham (Cañon City) and Representative Cheri Gerou (Evergreen) sponsored this resolution in their respective branches of the CO legislature.

In early 2011 Kathy McCoy of Buena Vista, CO designed two logos, one for the Association and one for the Pike Trail. Tom Rollins-Upper Arkansas Coordinator arranged for Kathy’s work.

In 2015 we began an effort to relate Pike’s loyal and purposeful character in our Membership campaigns, Newsletter and Federal effort. Pike’s values were laudable and make him a stand-out character. Pike was special, as evidenced by his rise from the rank of Lieutenant to Brigadier General in just 6 years.

In March 2016 the Colorado State Legislature unanimously passed the Pioneer Trail bill enabling 17 Counties to establish the Pike Trail in Colorado. Representative Jim Wilson reasoned with our Chair-person- Linda Balough that if the federal government cannot pass legislation leading to federal designation of the Pike National Historic Trail, we would at least get the job done in Colorado. Senators Grantham and Garcia joined Jim Wilson in the passage of the bill with testimony by Pike Board members Linda Balough, Kit Shy and Brian Pike.

Expansion of Mission to include 1st Expedition

In 2015 we expanded our Mission statement and efforts to include Pike’s 1st (Mississippi) Expedition during 1805 and 1806.

Since 2015 we are raising funds for our Pike memorabilia preservation effort by offering a set of 6 uniquely stamped pennies. We appreciate the efforts of Erwin and Jay Young in Mosca, CO.

Sets and individual coins are available for purchase from the Association. The San Luis Valley Museum, working under contract, recently purchased a stamping machine, offering their visitors the ability to stamp commemorative coins. 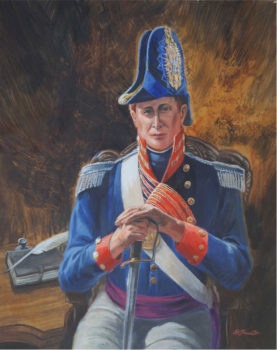 In November 2016 we entered into an agreement with Ed French of Cotopaxi, CO, retired Walt Disney artist, to produce artistic representations of Pike’s life. Available are: posters, note cards and full color t-shirts. We can now see what Pike saw.

Just some of the paintings available for purchase:

Since May 30, 2018 Ed has redesigned our Membership brochure, and business cards. Also, for sale at the Royal Gorge are a full-color T-shirt “I stood where Zebulon Pike stood.” and Ed’s Pikes Peak painting.

On April 9, 2017 an original published copy of the 1810 Pike Journal was presented to the San Luis Valley Museum in Alamosa, Co by Jim Bull.

In 2017, the Bylaws were again altered allowing for the inclusion of all 8800+ miles of Pike Trail- Border to Border (Almost Coast to Coast). The inclusions cover his life prior to the 1st Expedition, and after the 2nd Expedition, leading to Pike’s heroic death on Lake Ontario at the Battle of York (Toronto) in the War of 1812.