On September 19, 2019, Walsenburg, Colorado, members of Pike National Historic Trail Association met with Superintendent Aaron Mahr of the National Trail Intermountain Region of the National Park Service to outline the steps in developing a feasibility study of inclusion of the 1806 expedition of Lt. Zebulon Pike through the southwest portion of the Louisiana... 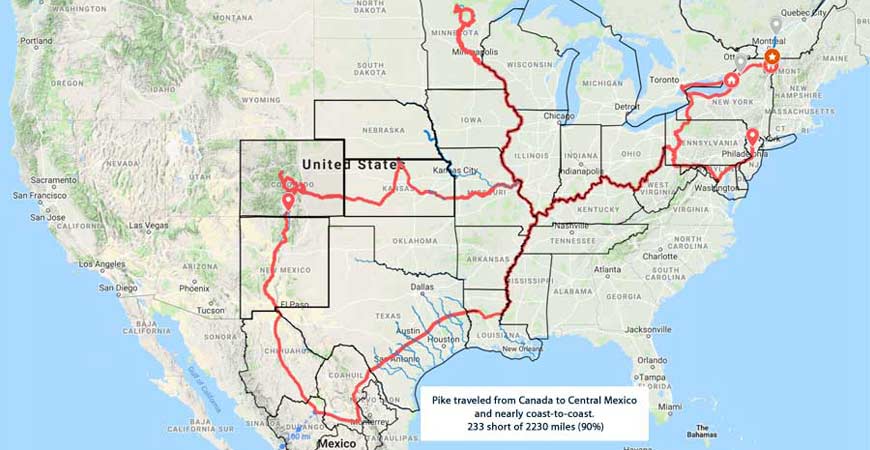 General Zebulon Montgomery Pike during his lifetime traveled and explored more than 8800 miles, in more than 320 of today’s counties, in 24 states, 2 provinces of Canada and 3 provinces of Mexico.

Zebulon Pike’s Life Can Be Divided Into Four Parts

Early Life: his birth in New Jersey in 1779, growing to an adult with his family at a series of outposts in Ohio and Illinois, to the beginning of his military career at the age of 15.

Southwest Expedition: During his second expedition, he was assigned to explore the American Southwest in 1806 and 1807. This is also part of Jefferson’s desire to explore the Louisiana Purchase.

Later Life: his military career and military expeditions including his heroic death as a Brigadier General in 1813 during the War of 1812. 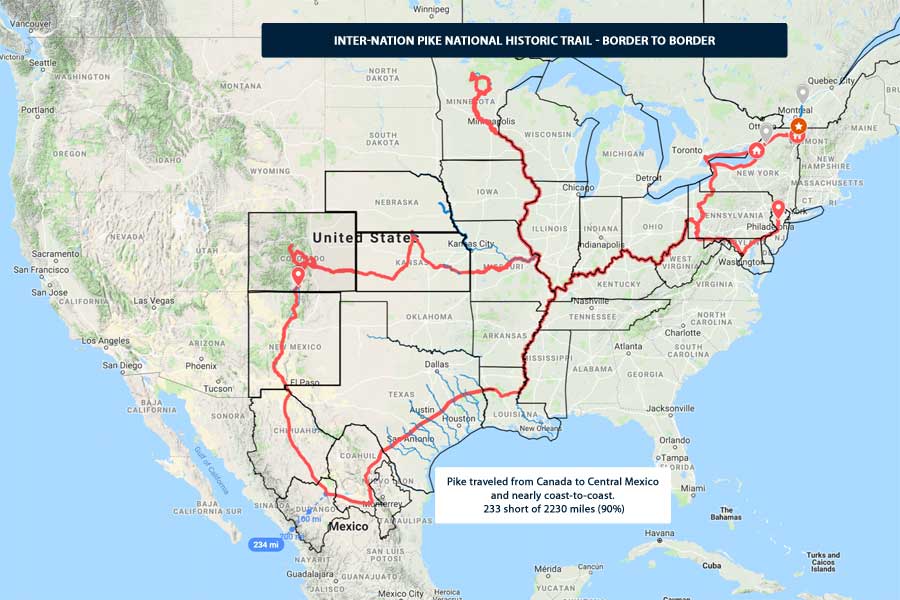 After receiving the ranks of 1st and 2nd Lieutenant in 1799 he piloted cargo boats on the Ohio River delivering supplies to outposts on the American frontier, and worked on logistics and payroll at frontier posts, including Fort Bellefontaine near St. Louis.

All 194 miles of this segment are shared by the Washington-Rochambeau Revolutionary Route National Historic Trail.

Was noticed and assigned command of his 1st and 2nd Expeditions.

The Mississippi River Expedition mission included the survey of land for future forts, making peace among the native tribes, and receiving agreements with the British to pay tariffs and other stipulations.

All responsibilities were accomplished, including the purchase of land of what is now Minneapolis-St. Paul, temporary peace and British agreement to American sovereignty.

He located the Mississippi headwaters then considered Cass Lake, MN.

Most of the Great River Trail is adjacent/contiguous with Pike’s route.

Pike was assigned to return 51 Osage to their homeland in SW Missouri, attempt to establish American sovereignty and peace on the Great Plains, and locate the headwaters of the Arkansas and Red Rivers.

The mission was completed with the exception of finding the headwaters of the Red River. The Pawnee in Nebraska removed the Spanish flag and replaced it with Pike’s 15 star American flag. He challenged the Spanish while being able to collect valuable information while in New Spain.

57% is already designated in 5 other National Historic Trails.

Pike rose quickly in rank and responsibility after his 2nd expedition. During the War of 1812 he became a Brigadier General. He led troops to assess British strength in Montreal after building a base in Plattsburgh, NY.

General Pike was the commander of US troops in April 1813, leading an attack from Sackets Harbor, New York on Fort York (now Toronto). The Americans won the battle but the General lost his life, dying an American hero.

Support from the Colorado State Legislature and Governor

We keep an inventory of Pike monuments in the US and Canada. He is remembered. Pikes Peak, the Pike National Forest are well-known locations named for Pike. A note of interest- Toronto has 3 monuments for Pike one erected recently.

We have gathered the support from numbers of states: mayors, counties, chambers, heritage/historic organizations, etc. as well individuals. Many serve as State Coordinators and Advisors on our Board.

Pike’s field maps and Journal accounts of both expeditions have been used to pinpoint locations and information used. The bibliography on our website indicates other resources we use.

The Pike National Historic Trail Association provides for the public maps and links on our website: https://www.zebulonpike.org.

The designation of the Pike National Historic Trail will be a benefit to the American People and International visitors through:

The Pike National Historic Trail Association aspires to make known, to current and future generations, the strong military leadership General Zebulon Montgomery Pike provided and the tremendous sacrifices he made for his beloved America.

“Zebulon Pike was an American hero, a patriot who lived and died for his country.” Thomas Jefferson