Article by Allan Vainley 12/23 to 31/1806 Pike, Mountjoy and Miller had explored the headwaters of the Arkansas and are now following the others from Johnson Village south and caught up with them on the 24th. They spent Christmas Eve and Christmas at Big Bend 7 miles northwest of Salida, CO. They encamped on the... 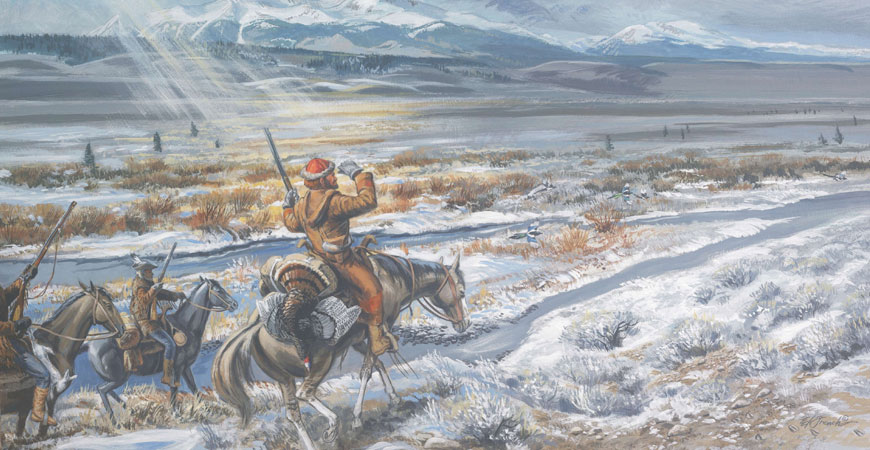 Pike, Mountjoy and Miller had explored the headwaters of the Arkansas and are now following the others from Johnson Village south and caught up with them on the 24th. They spent Christmas Eve and Christmas at Big Bend 7 miles northwest of Salida, CO. They encamped on the Arkansas in Salida and continued down the Arkansas thinking it to be the Red River (their remaining goal). They had no way of knowing it was not the Red River until they encountered the Royal Gorge and their stockade in Cañon City which they left on December 10th.

Today’s Brown’s Creek in Browns Canyon “Marched early, and at 2 o’clock, p.m. discovered the trace of the party on the opposite side the river; forded it, although extremely cold and marched until some time in the night, when we arrived at the second nights encampment of the party. Our clothing was frozen stiff, and we ourselves were considerably benumbed.”

The party’s provisions extending only to the 23rd, and their orders being not to halt until they killed some game, and then wait for us: consequently they might have been considerably advanced. About 11 o’clock, met Dr. Robinson on a prairie, who informed me that he and Baroney had been absent from the party two days without killing any thing, (also without eating,) but that overnight, they had killed four buffalo, and that he was in search of the men; suffered the two lads with me to go to the camp where the meat was, as we had also been nearly 2 days without eating. The doctor and myself pursued the trace and found them encamped on the river bottom. Send out horses for the meat, shortly after Sparks arrived and informed us he had killed four cows. Some being in the starving condition we had eight beeves in our camp. We now again found ourselves all assembled together on Christmas Eve, and appeared generally to be content, although all the refreshment we had to celebrate that day with, was buffalo meat, without salt, or anything whatever.

It being stormy weather and having meat to dry; I concluded to lie by this date. Here I must take the liberty of observing that in this situation, the hardships and privations we underwent, were on this day brought more fully to our mind. Having been accustomed to some degree of relaxation, and extra enjoyments; but here 800 miles from the frontiers of our country, in the most inclement season of the year; not one person clothed for winter, many without blankets, (having been obliged to cut them up for socks, &c.) and now lying down at night on the snow or wet ground; one side burning whilst the other was pierced with a cold wind: this was in part the situation of the party whilst some were endeavoring to make a miserable substitute of raw buffalo hide for shoes &c. I will not speak of diet, as I conceive that to be beneath the serious consideration of a man on the voyage of such nature. We spent the day as agreeably as we could be expected from men in our situation. Caught a new species, having made a trap for him.

Marched at 2 o’clock and made 7 1/2 miles to the entrance of the mountains. On this piece of prairie the river spread considerably, and formed several small islands, a large stream enters from the south. As my boy and some others were sick, I omitted pitching our tent in order that they might have it; in consequence of which we were completely covered with snow on top, as well as that part on which we lay.

Marched over an extreme rough road, our horses received frequent falls and cut themselves considerably on the rocks. From there being no roads of buffalo, or sign of horses, I am convinced that neither those animals, nor the aborigines of the country, ever take this route, to go from the source of the river out of the mountains, but that they must cross one of the chains to the right or left, and find a smoother tract to the lower country. Was obliged to unload our horses and carry the baggage at several places. Distance 12 1/2 miles.

Marched over an open space and from the appearance before us, concluded we were going out of the mountains, but at night and encamped at the entrance of the most perpendicular precipices on both sides, through which the river ran and our course lay. Distance 16 miles.

Marched but owing to the extreme ruggedness of the road, made but 5 miles. Saw one of a new species of animals in the mountains; ascended it to kill him, but did not succeed. Finding the impossibility of getting along with the horses, made one sled, which with the men of three horses, carries their load. Camp Location: Cotopaxi Fremont County 38.371006, -105.688218 6350’ 30th December, Tuesday.- Texas Creek Marched: but at half past one o’clock; we’re obliged to halt and send back for the sled loads, as they have broken it and could not proceed owing to the waters running over the ice. Distance 8 miles. Crossed their horses twice on the ice.

Marched; had frequently to cross the river on the ice, horse falling down, we were obliged to pull them over on the ice. River turns so much to the north, as almost induced to us to believe it was the Arkansas. Distance 10 3/4 miles.

The doctor and one man marched early, in order to precede the party until they should kill us supply of provision. We had great difficulty in getting our horses along, some of the poor animals having nearly killed themselves falling on the ice. Found on the way one of the mountain rams which the doctor and Brown had killed and left in the road. Skinned it with horns &c. at night ascended a mountain, and discovered a prairie ahead about 8 miles, the news of which gave great joy to the party.

Elliot Coues notes-Page 478 it should be noted here that one of the eighth straggling parties managed to get through the canyon
itself. Some came over the mountains to the North, and the rest over those on the south. Pike alone assayed the gorge, but only
got halfway through. Next morning he escaped by scrambling up a small side Canyon which occurs in the north-side (Pike’s
Gulch.) Dr. Robinson and his man came that way too. Vasquez and his men brought the horses the other way.

Labored all day, made only 1 mile, many of our horses much wounded in falling on the rocks. Provision growing short, left Stout and Miller with two loads, to come on with his sled on the ice, which was on the water in some of the coves. Finding it almost impossible to proceed any further with the horses by the bed of the river, ascended the mountain and immediately after were again obliged to please descend an almost perpendicular side of the mountain; in effecting which, one horse fell down the precipice, and bruised himself so miserably, that I conceived it mercy to cause the poor animal to be shot. Many others were nearly killed with falls received: left to more men with loads hand tools to make slides. The two men we had
left in the morning had passed us.