At Christmas, Pike camped on the geological debris of multiple ancient floods. This is Part One, of a Two-Part Series. Read Part Two. Three Glaciers Flood, Arkansas River, Colorado Vince Matthews, Ph.D., formerly the Colorado State Geologist who lived in Leadville at one time spurred thought about where the large rocks came from on the... 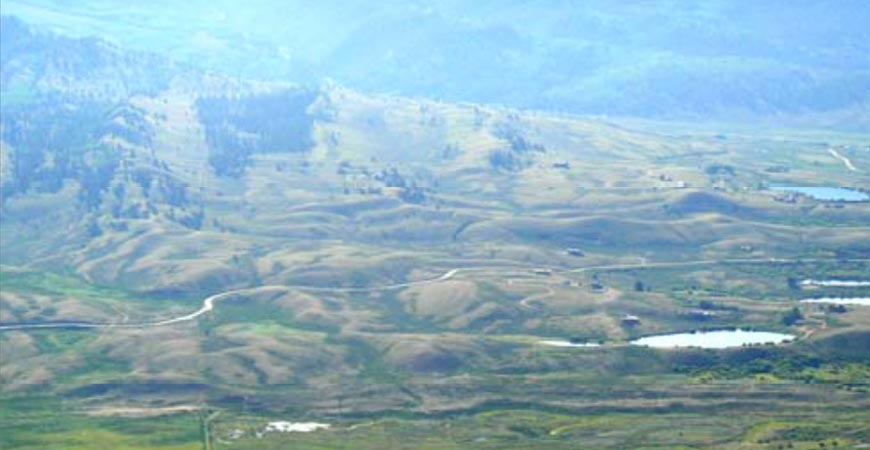 At Christmas, Pike camped on the geological debris of multiple ancient floods.

This is Part One, of a Two-Part Series. Read Part Two.

Vince Matthews, Ph.D., formerly the Colorado State Geologist who lived in Leadville at one time spurred thought about where the large rocks came from on the valley floor and a study of the possibility that the Arkansas from its headwaters to Salida was once the headwaters of the Rio Grande River.

Dr. Keenan Lee, Professor Emeritus – Colorado School of Mines, after extensive study, gave our readers in 2015 many incites. Lieutenant Zebulon Montgomery Pike and his men walked into the Upper Arkansas Valley most likely did not notice the large out-of-place rocks scattered on the Valley floor from Twin Lakes [15 mi S of Leadville CO] for 22 miles S to Johnson Village. They were impressed with the snow covered Collegiate Range 14,000 ft mountains. The size of the boulders suggests a catastrophic flood transport, far bigger than any seen here in historic times. 1 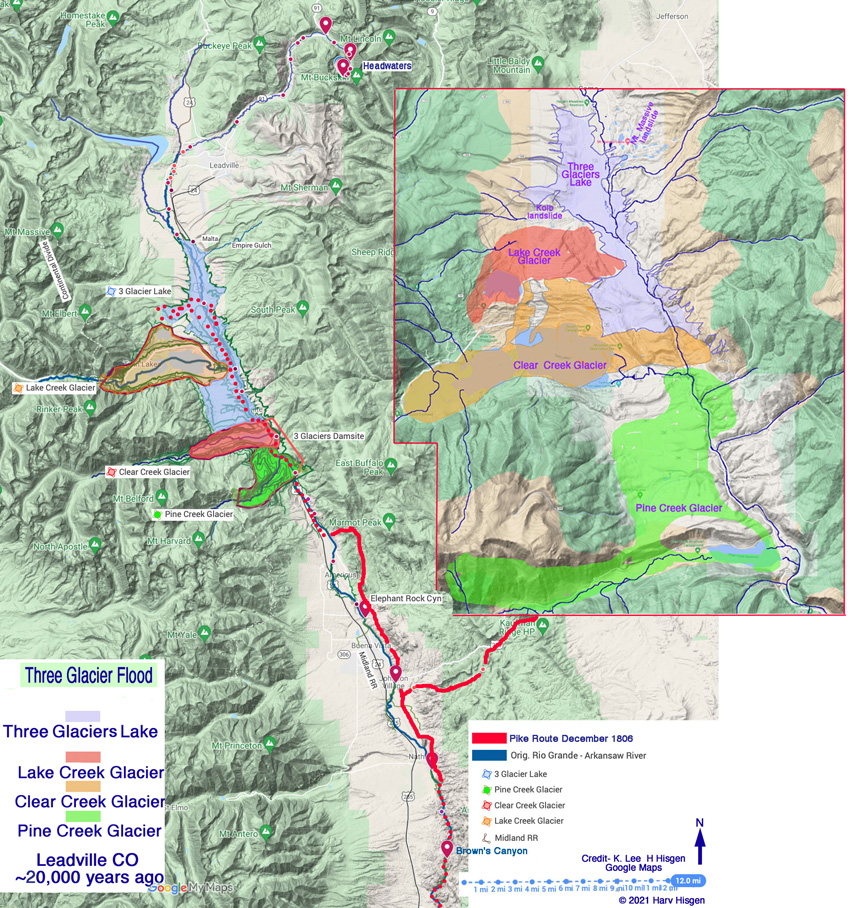 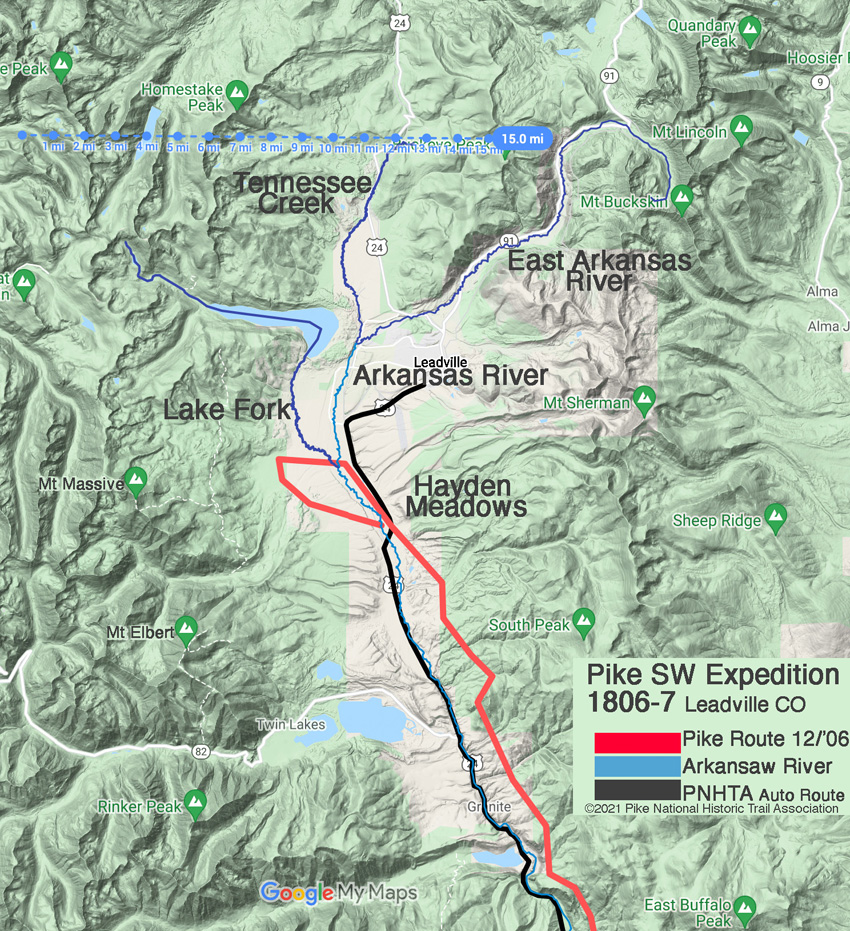 20,000 years ago, three glaciers flowed east down to the Arkansas River – one glacier [Lake] pushed the river out of its channel, and the other two [Clear & Pine] crossed the river and rammed into granite walls on the east side of the valley scarring the walls in concave hollows as seen today. These can be called “whamout [forcible impact washout] zones”.

The glaciers formed an ice dam that blocked the Arkansas River and created a large lake above the dam. When the ice dam broke, the entire lake drained catastrophically and the outburst tore down the valley as a wall of water hundreds of feet high. This actually happened twice, about 20,000 years ago and about 120,000 years ago.

Where did the boulders and mounds of sediment topping the granite come from? 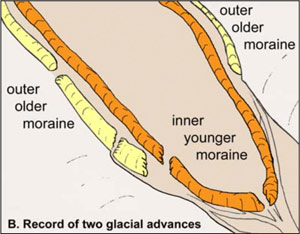 Fig. 2—After glaciers melt, remaining moraines and till mark the former positions of the glaciers.

Previous floods [120,000 years ago] and glaciers covering the Sawatch Range on the west side and partially the Mosquito Range on the east side of the Valley carried large boulders and unconsolidated sediment like mud, sand, pebbles, and cobbles to the Arkansas except for three narrow granite bounded canyons at a) the Three Glaciers damsite [Granite-Clear Ck./Pine Ck], b) Elephant Rock Canyon 10 miles south [north of Buena Vista], and c) Brown’s Canyon [near Salida].

Proof? Innumerable core samples have been taken and the boulders analyzed. Included were of the lateral moraines- the ‘till’ left by the glacier along its sides and at the snout edges and the entrained debris dumped there in unsorted piles [all called till]. After glaciers retreated, the moraines record the former positions of the glaciers.  We know about the geographical and geological past of the Valley.

The flowing ice piled up, thickened and spread out upriver and downriver, forming a bulbous mass that from above had a tulip shape. The Pine Creek glacier spread out so much that it effectively merged with the Clear Creek glacier.

A dam elevation of about 9400 ft is a reasonable estimate and therefor its height was ~ 520 feet close to 2 times [1.7x] the height of the Statue of Liberty.

Fig. 4—The Dam Site  and terrain from the Arkansas Headwaters to Leadville to  Buena Vista to Salida

The dammed Arkansas River backed up behind the glacial dam and created lake, which was more than 500 ft deep at the dam and extended 14 miles up the Arkansas Valley to the Malta substation, just below Leadville.

The dam catastrophic failure and instantaneous dumping of the lake was likely caused by seepage around the dam and flotation when the lake level rose to 90% of the thickness of the ice [slowly pour water into a glass containing a single ice cube, at the 90% level the ice cube floats].

As soon as the glacier got high-pressure water under it, it would have been torn apart in seconds, and the lake just catastrophically dumped into the valley below.

Think about this. You’re sitting on top of Mt. Elbert watching a 48 billion cu. ft. piece of ice from the Dam, a 520 ft high wall of dirty water, followed by the 1 billion cu. ft. sheared Lake Creek Glacier, and boulders the size of houses blast through the valley. Cover your ears! The seismic sound would have been deafening.

The Arkansas River Valley flat floor saw a wall of dirty water hundreds of feet high tear down the valley.

Two miles below Pine Creek it was still deep enough to leave a four-foot boulder 160 ft up on the side of the valley.

Erosion was severe in the damsite area when floodwaters tore an extremely steep gradient at Pine Creek, where the Arkansas River today drops 50 ft in a distance of 1300 ft, or more than 200 ft/mi.

The Result of These Floods

Last two catastrophic floods caused major changes in the valley. Not only were huge ice and water-rafted boulders [as big as a house] been transported down the valley [some lofted 160 feet above the valley floor] in a matter of minutes; huge scars in the granite walls on the east side occurred opposite Clear and Pike Creeks, terracing the landscape 50 feet above the valley floor and the glacial moraines altered the landscape. The glacial snout [hill] on the east side of Twin Lakes, for example, is glacial till from 120,000 years ago and the lake division occurred 20,000 years ago. 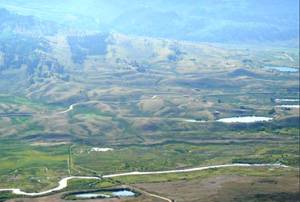 Pic. 3—Mt Massive Lakes on the E side of the Ark 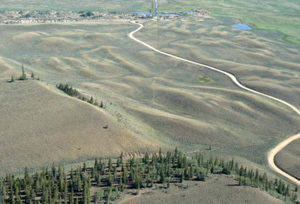 Pic. 4— Kolb on the W side of the Ark N of Twin Lakes/Mt Elbert Forebay

These floods tend to destroy evidence of earlier events. Fragmentary evidence remains of earlier ones. 3. Glenn Scott, the pioneer in flood recognition [Scott, 1984], found a volcanic ash on top of these boulders that he determined came from an eruption at Yellowstone National Park 600,000 years ago, suggesting the flood was at about this time 4. A similar deposit at Buena Vista attest to an even earlier flood. Glenn Scott thinks this one tore down the Upper Arkansas Valley as long as 1.4 million years ago 5.

Paleoclimate studies show that in the last 800,000 years there have been 8 ice ages, spaced about 100,000 years apart. [See Fig. 6 below] This climate change occurs because as the earth in its elliptical path around the sun moves farther from the solar energy therefor producing cooler temperatures and eventually ice ages when near its maximum distance called aphelion. [see Fig. 5] In the next 50 kyr, we move constantly closer to perihelion position into global warming. Currently we are moving toward another ice age and the next catastrophic floods in about 80,000 years with or without significant differences.

Legacy of the Catastrophic Floods 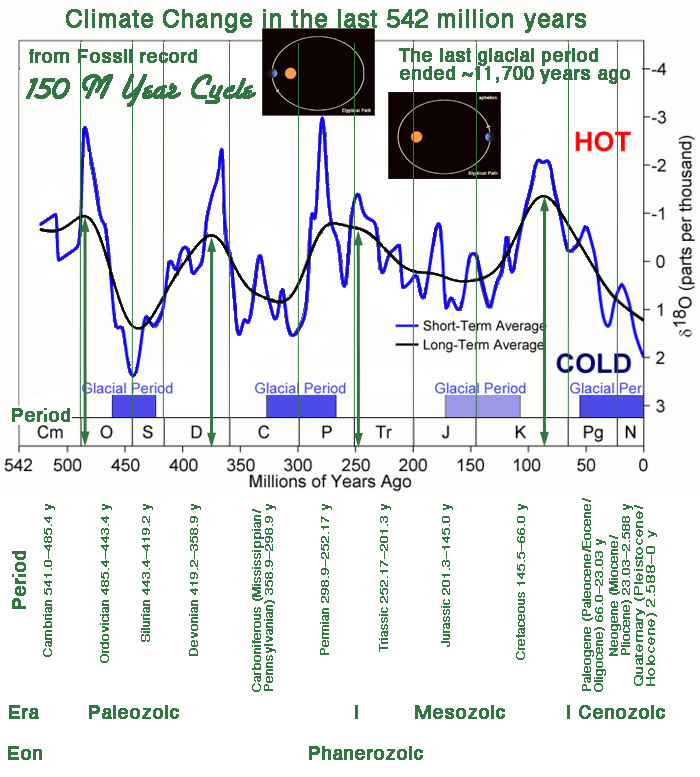 Pic. 6— Evidence in the fossil record show when cooler and warmer climates occurred.

The Three Glaciers Flood created Arkansas River rafting and kayaking opportunities at the Class IV-V rapids of Granite Gorge, rapids in The Numbers, and the Railroad Bridge section of rapids. This valley is a 100,000 year floodplain.